One day, in a distant kingdom, an old king died. Since he was loved by all his people, he was taken to his last home in absolute sadness.

The day after the burial of the father king, his son inherited the famous throne. But he was more proud than responsible. “Well, at last I’m the king! From now on, I will do what I want! Why did my father, the previous king, send me to school? I did not need it. I was going to become a king. My destiny was already drawn like that of my grandfather and the grandfather of my grandfather, the previous kings ?!” He thought as he sat down for the first time on his father’s throne. 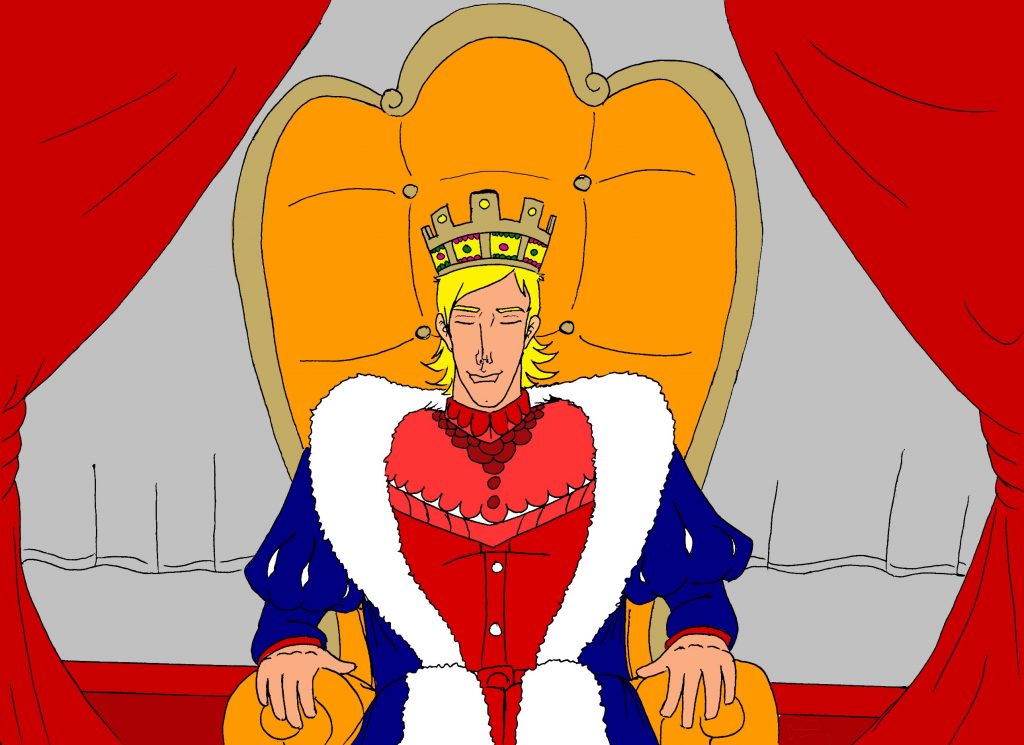 The minister,still sad and traumatized by the disappearance of the venerated king, a little suspicious of this vain successor and not paying attention to what he said, advanced cautiously and announced:

–  Majesty, the food collected last year is about to expire …

– Ask my subjects to fix it. What are they good at if they cannot even fill the barns of my kingdom?

– But Majesty, your subjects have other responsibilities …

And the angry king interrupted his minister:

– Oh la la la la! What is this minister who dares to answer the king word by word. You are no longer my minister. I want another minister Tomorrow, at dawn.

And he fired the Prime Minister … 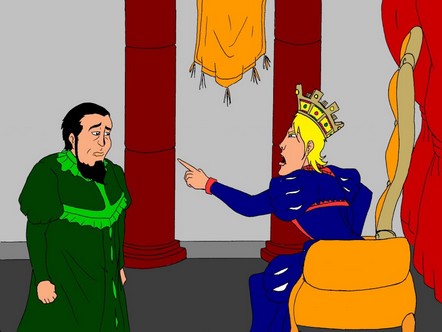 When King Toquet, one day, strolled through the alleys of the city to savor his royalty, he heard applause as he passed, “Long live the king!” that we have heard for centuries as he passed. All of a sudden, a wandering cat, wanting to catch a bird, jumped over his head. The angry king shouted, “What is this cat that dares to pass over my head? Servants, tomorrow, at dawn, I do not want to see any cat in my kingdom.Banish all of them!” 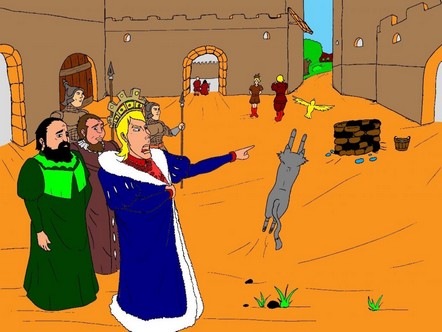 The next day, as the first gleam of light appeared, there was not any seen cat running around in the area. The monarch  left followed by his dogs, his ministers and his servants to the hunt, his favorite hobby. As soon as he slaughtered a hare with his bow, the dogs went running to recover it, and again, the king was furious against these poor animals:

– What are these dogs that go to fetch my prey without my order? Tomorrow, at dawn, I do not want to see any dogs anymore. Hunt them all out of my kingdom! 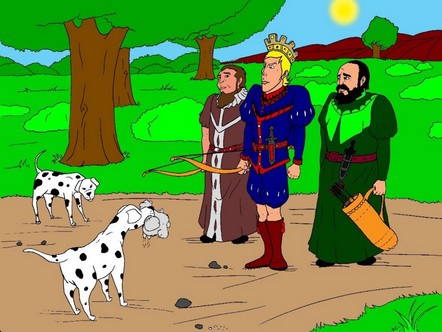 The morning came, so no cats were seen roaming around, and no dog barking was heard. The king then experienced a feeling of victory like never before. He went out for his daily walk, strutting about in his country, followed by a crowd of ministers, servants, and bodyguards. All of a sudden, he was surprised by a beggar who had managed to escape the vigilance of his supervisors, asking him:

– Majesty, mercy! I have no bread crumbs to give to my children. Feed them, Majesty!

Toquet, blushing with anger, cried out to his ministers:

– What are these poor people who dare to approach the king and disturb his tranquility in the morning? Tomorrow, at dawn, I do not want to see poor people in my territory. 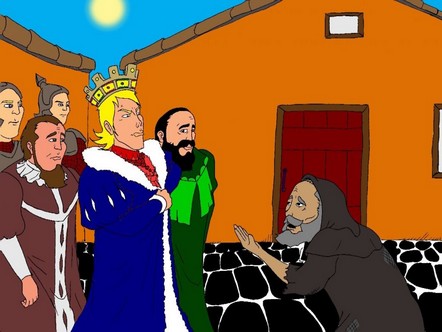 The king’s order was executed, the sun rose on a world where no cat was seen prowling in the vicinity, no dog was heard barking and none of those poor people who animated the Square and and used to get rid of vegetables and fruits stale which used to remain scattered on the ground at the end of the day. The king was relieved not to see anything that disturbed his peaceful life in his kingdom. In the evening, he went home, sat down, and was surprised that his dinner was not yet served, so he shouted at his minister:

– What are these servants who cannot serve the king’s table in time? Tomorrow, at dawn, I do not want to see any more servants in my kingdom!

The minister, embarrassed, answered his head, all lowered:

– There are no more servants are in your Majesty’s kingdom!

– Your Majesty has ordered us yesterday to drive out all the poor people of your territory.

– Are the servants also poor people?

– And what did they do in my castle?

– They don’t have neither a roof nor a law that protects them. They only counted on your charity, and in return, they worked for you, Majesty.

– Me, a King and son of king, I rubbed my shoulders with poor people ?! Why did you recruit them? Did I order you, Minister?

– Tomorrow,  I do not want to see any minister in my kingdom anymore! 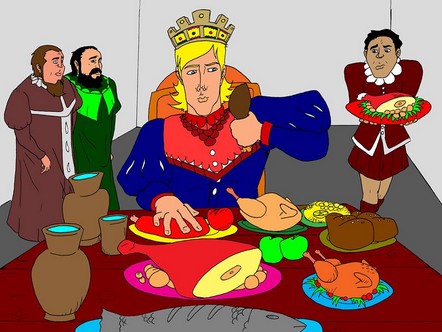 The day after, King Toquet went out to supervise what his subjects undertook, who were no more than a handful of bourgeois that were unhappy to have lost their servants and their workmen. The richest approached him:

– Majesty, please find us a solution. We are losing our money and calm because of the departure of the poor people of the kingdom.

And the king, not enjoying being asked anything again, replied:

– What are these bourgeois who wait for the king to solve their problems. Cannot they do it themselves? Tomorrow, at dawn, I do not want to see any bourgeois in my country. 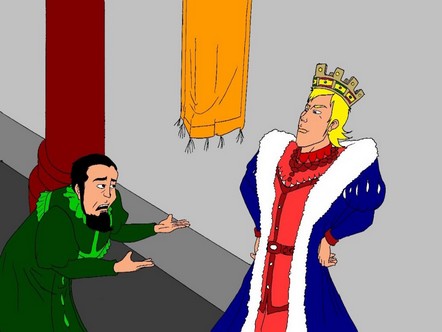 The next morning, the monarch awoke, sat down, but no one served him. He called his minister, and no one answered. He took the trouble to make his sandwich alone, changed his clothes all by himself and went out to see what was happening in his kingdom. However, he did not see any cat prowling in the vicinity, heard no barking of dogs, was not disturbed by any beggar, felt no minister’s footsteps behind him, and no bourgeois came to ask him for a solution or help. He got angry, went up to the balcony of his castle, and shouted with all his strength:

– I am the king! I am the one who command! I order you to return to my kingdom! That’s an order!

But there was only the echo that returned his words. He repeated:

After a long moment, a small voice was heard. He searched for the source but found nothing. So, he calmed down and listened:

– You cannot make yourself obeyed by cracking down! Look! you’re not even a king anymore! You no longer have a kingdom. Royalty takes place in the presence of thgose people whom you have driven from their homes. They can find a new king, but you …

– What is this little voice that dares to advise me. Tomorrow, at dawn, I do not want to hear any small voice in my kingdom!

And the little voice calmly continued: 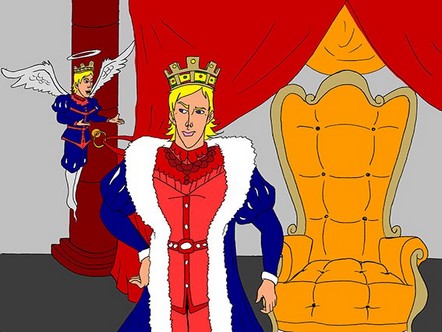 – You don’t have over whom to reign anymore, so you are no longer a king. What once was your kingdom is no more than a deserted land which could not be a kingdom without subjects.

And the king, even more furious than ever, exclaimed:

– You no longer have anyone to rule over, so you are no longer a king.

And the little soft voice went on calmly: